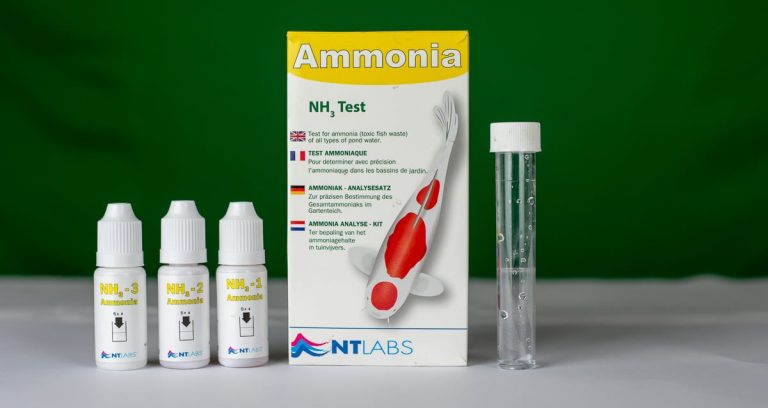 A reliable ammonia test kit is an essential item for all fish keepers. Ammonia is a key parameter to monitor as it is acutely toxic but continuously being produced by the fish. These drop kits are much more reliable than test strips and very simple to use. They are not accurate enough to use at different sample points around a system but their ease of use and low cost means they are an excellent choice to ensure that safe levels are maintained.Without a doubt all aquarists need to control fish ammonia and a reliable ammonia test kit is an essential tool.

All these test kits test for Total Ammonia Nitrogen (TAN) and consequently may NOT indicate actual toxic levels. For this you need to record water temperature and pH and use a Table that shows the percentage present of the toxic NH3 proportion of the TAN.

You may well find that it is more economical and convenient to buy a complete pond test kit.

Why you need to test for ammonia

Ammonia is continually being excreted by all aquatic animals. If it is not broken down, or removed, it can quickly kill your fish. At the very least they become more stressed and more susceptible to disease. Visual signs of ammonia toxicity in fish  include;

Unfortunately these signs can equally apply to a range of other water parameters and disease situations. They cannot be relied upon as a diagnosis. Ammonia poisoning should always be suspected but needs to be confirmed with a test kit.

Were does ammonia come from?

Ultimately the vast majority of the ammonia comes directly from the fish as it is continually being excreted by the gills. Additional load  can also originate from decaying organic matter such as dead fish, dead plants and dead bacteria. This is all part of the Nitrogen Cycle. Urine and solid waste, including uneaten food, can also be significant.

Not such silly question! Ammonia exists in two distinct forms. Ammonia, which is represented chemically as NH3, and ammonium, which is NH4.  Ammonia is unionised and ammonium is unionised. This is because most test kits record the total ammonia level represented by NH4 and NH3. In reality it is only the NH3 that is toxic. The amount of NH3 present has to be calculated from tables that show the percentage of NH3 present based on water temperature and pH.

What is an acceptable level of ammonia?

Ideally the level of ammonia present should be at, or close to, zero. This is rarely the case as it is constantly being produced. The generally accepted maximum recommended level is 0.02mg l.and is the level stipulated in the Ornamental Fish Trade Associations Code of Practice. However this is not the full story. If the level indicated by the test kit is 0.25 mg l or less there is rarely any problem. If it is above this level then more care is needed to interpret the result.

If you need a more accurate ammonia test kit

The above kits are great if you just need to check that the water is safe for your fish. If however, you want to test the effectiveness of your filtration system for instance, something more accurate is needed. This is something that is routine practice in aquaculture but is rarely, if ever, done by hobbyists. It nevertheless can reveal some really useful information.

By having accurate figures for ammonia going in and out of a filter its performance can be accurately assessed. Many times in the past I have found filters that have a higher level of ammonia leaving the filter than going in. Needless to say this is usually met with incredulity by the pond owner. This situation is usually caused by the accumulation of decaying organic matter, uneaten food and a low population of nitrifying bacteria.It’s a sure indication that the filter needs to be cleaned and the mechanical filtration improved. Failing this it’s sound evidence that the pond is overstocked and some fish need to be removed. Ammonia levels should then start to drop to a much lower level.

If you are serious about optimising your filtration system then a photometric method of determining ammonia levels is much more accurate. It is no more difficult to analyse a water sample with this method although each test does cost a little bit more. Still it is normally better to have a few accurate results rather than many broad range figures.

Just as by measuring ammonia levels across a filter it is perfectly possible to measure diet efficiency by recording ammonia levels going in and out of a rearing tank. Although there will be a reduction in ammonia by the action of nitrifying bacteria that live on the sides of a pond you can still get an approximate estimate of the water polluting potential of different diets.