Tilapia aquaponics has been attracting a great deal of attention lately, and for good reason. They are second only to carp as a farmed fish across the World. Tilapia are, in fact, produced in a greater number of countries with over 100 nations actively growing this fish. Several factors make them ideally suited to aquaponics system and were raised by two-thirds of aquaponic practitioners in a recent survey by Love et al.(2014). The favourable characteristics include;

Tilapia culture was widely encouraged as a means of farm diversification during the early 2000’s. The Institute of Aquaculture, based in Stirling University, provided much of the impertus and, as a consequence, feasibility trials tended to be centred around Scotland. Sadly, there are few, if any tilapia farms in the UK today. The reasons behind this lack of success are long and varied. Scale of operation, reluctance to take on novel fish production techniques and strong competition from China kept profitability a distant goal. Nevertheless tilapia have much to recommend them and for the home producer with an indoor, well-insulated system they are definitely worth serious consideration.

Tilapia are actually a collection of over one hundred seperate species, and subspecies,originating from Africa and the Middle East. This has allowed extensive cross-breeding and hybridisation programmes to develop new varieties better suited to aquaculture. The following species are currently the most important.

a) The Nile Tilapia – Oreochromis niloticus

The Nile Tilapia is the most dominant species cultivated, accounting for over 90% of production. This is largely on account of its rapid growth, larger size and excellent eating qualities. Under optimal conditions it can grow to 60cm, or 5kg, in around 9 years. It matures in just 4 – 6 months when it weighs around 200g.

The history of tilapia stretches back 4,000 years to ancient Egypt. This particular species originates  from tropical and sub tropical regions of Africa and the Middle East. Widely distributed in the Nile and Niger river systems and lakes Tanganyika , Edward and many other lakes across Africa.

b) The Blue Tilapia – Oreochromis aureus

The Blue Tilapia is smaller than O. niloticus and slower growing. It usually takes about three years for it to reach a weight of 1 – 2kg.  It inhabits similar areas, more specifically around North Africa and the Middle East. It has spread to the USA and is now inhabits most waters in Florida. The species is able to adapt to many conditions and can thrive in brackish water.

Smaller than both the two previous species. Native to Southern Africa and inhabits the Lower Zambezi delta . First tilapia introduced to Asia in the 1940’s. It’s growth rate and ultimate size sits somewhere between the Nile and the Blue Tilapia.  A 1kg fish can be produced within 12 months however. It’s lower growth rate has severely restricted its culture to Southern Africa.

Like the Blue Tilapia this species has been introduced to the USA, primarily as a sport fish but also for plant control.

The readiness to breed across many different species has lead to much cross fertilisation and controlled breeding programmes with the intention of optimising production. 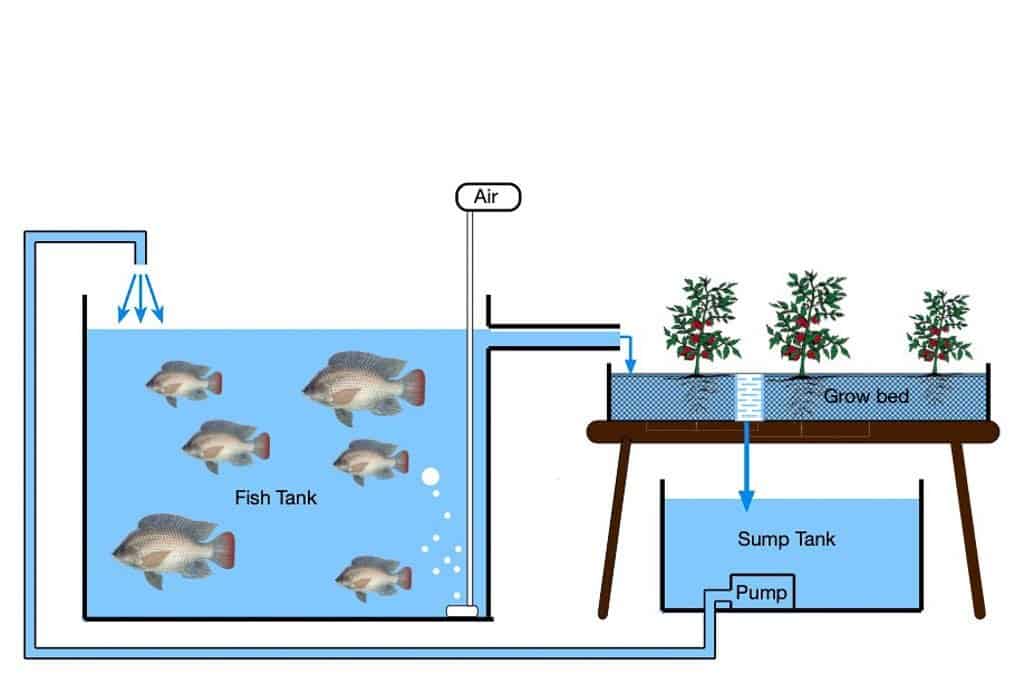 One fundamental requirement for successfully growing tilapia fish is a minimum water temperature of around  12°C. As a consequence they are not suited to outside culture in the UK.

In order to keep heating costs to an absolute minimum efficient insulation is necessary. One of the best ways of achieving this is to build the aquaponic unit within a double skinned polytunnel with 150mm of glassfibre insulation sandwiched between the two skins. These buildings are typically used for growing mushrooms. In such a building very little, if any additional heat is required to main temperatures in excess of 25 °C for most of the year.

A clue to the main problem with such an arrangement can be gained from the fact that mushrooms, unlike all aquaponic plants, do not require light to grow. The options around this is to either install additional artificial lights or to pipe the water into a more traditional green house that houses the growing plants.

Tilapia have evolved to survive in static warm water ponds that can have extremely low dissolved oxygen contents. They are capable of surviving levels down to 3 mg/litre. However, to thrive and grow, the oxygen level within the fish tank should be as close to saturation as possible. For further information see the article Do fish need oxygen?

Tilapia pH requirements are relatively modest and they are quite happy between pH 6 and pH 9. Plants, on the other hand, require a pH between 5.5 – 7.5. One of the great compromises of all aquaponic systems revolves around pH. Generally speaking it is best to attempt to maintain a pH close to 7 in order to keep both fish and plants happy. For further information see my article on Fish Tank pH

Again, tilapia are pretty accommadating with regards to ammonia tolerance. Unionised ammonia still is a serious poison and needs careful control, but there is more latitude when it comes to tolerating spikes. As a guide keep levels below 0.2mg/litre of NH3-N. At the suggested operating pH of 7 a total ammonia nitrogen (TAN) of 1 – 2 mg/litre should be acceptable. See my article on fish ammonia for more detail. Most simple ammonia test kits actually measure TAN so this is a more useful guide than quoting unionised ammonia levels.

Nitrite is less toxic than ammonia but still requires careful control. It is an integral part of the Nitrogen Cycle and is best managed through the effective use of biological control filters. This could be in the form of a media-based grow bed, a living root system in a deep water culture system (DWC) or a separate dedicated bio filter.

Nitrate is really of minor concern as regards toxicity to tilapia, and most other fish. It is worth monitoring as it is a good indicator of nutrient availability for the plants. Anywhere between 10 and 150 mg/litre should not cause any problems.

Tilapia are omnivorous grazers that eat a very wide range of feedstuffs including phytoplankton, insect larvae, aquatic plants, bacterial slimes and general detritus One of the great attractions of raising tilapia in a low cost aquaponics system is that it can be grown on a low protein, herbivorous diet. Feed costs typically represent the biggest production cost on the majority of fish farms. Anything to reduce our reliance on declining fish meal is very welcome. Commercial fish food pellets is by far the most common feed for aquaponics systems. It is readily available and ideally suited to automatic feeding techniques.

As with all fish the amount of food given , as a %BWD (body weight per day) decreases as the fish get bigger. In other words smaller fish metabolise faster and grow faster, relatively speaking, than small fish. The table below has been recommended by …….

Both sexes mature early, in a matter of a few months. This reduces growth rates significantly as energy is diverted into the production of eggs and sperm. The females are affected to a much greater degree than the females. In fact, males grow about twice as fast as females. As a consequence it is much more efficient to grow on just the males. This can be achieved in a number of ways;

This can be very time consuming on a large scale. For home producers this however is probably the simplest method.

Breeding tilapia is not difficult but careful control of the continuous supply of fry is needed if the fish tank is not to become overstocked. Each female can produce several hundred fry every month. In spite of cannabolism it is all too easy to exceed the carrying capacity of a filtration system.

Tilapia do not differentiate into males and females for several days after they have absorbed their yolk sacs. If they are fed fish food containing the male hormone methyl testosterone, they will all develop into males. It goes without saying that this practice has a number of ethical issues and, for this reason, is not permitted in the UK, or indeed Europe.

Swansea University has developed a third method of ensuring an all male population. With this technique a ‘supermale’ is produced that has two YY chromosomes rather than the usual XY chromosomes. In this way it is impossible to produce any females (XX). The only two outcomes are more super males (YY) or normal males (XY)

For most small-scale operators of aquaponics systems marketing is largely irrelevant. If you do not intend to sell your fish then this section will not be important to you. However, in the early years of the 21st century there was a great deal of effort put into trying to encourage conventional farmers into diversifying into rearing tilapia for the UK table market. Sadly this has had very limited success. The costs, risks and management skills associated with operating a recirculation aquaculture system (RAS) have all but knocked this initiative on the head.

Globally speaking in excess of 800,000 metric tonnes of tilapia are cultivated. China is regularly the biggest producer of tilapia, by some margin. Massive expansion, in recent years, of pond culture in China, and the USA, have kept global tilapia prices low. The introduction of automatic filleting machinery has also played a significant role in developing this market. Tilapia is widely accepted in the USA being the fourth most popular table fish species. In the UK it is becoming more acceptable and Tescos’s now sellers tilapia that has been produced in China. For anyone contemplating a commercial tilapia unit in the UK they need to develop a completely different strategy.

Although not mentioned at the time, the aquaponic system of producing fish and plants in a harmonious way fit very well with all he above groups.

Live fish should play a crucial role in any attempt at a commercial aquaponic system. The Chinese market is likely to form a large chunk of this sector.

Fingerling Suppliers in the UK

There are very few UK tilapia hatcheries in the UK in 2020. Home producers may well wish to set up a small hatchery to ensure they have their own, bio secure, supply. It does require additional facilities and can be very time consuming but it can also be a lot of fun! For anyone looking for live fingerlings it may well be worth contacting ; Kawthar at Fish Farm UK